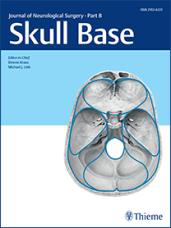 Objective: To evaluate the emerging role of immunotherapy as primary modality of treatment or in combination with traditional therapies in late-stage sinonasal mucosal melanoma (SNMM). Immunotherapy has been successfully used to treat patients with mucosal and cutaneous melanoma. The expanding success of immunotherapy in these regions suggests a potential role in the treatment of sinonasal melanomas (SNMM).

Methods: Within the principal author’s multidisciplinary skull base tumor conference database of 3,224 cases, documenting cases over the past 13 years, there were a total of 72 cases of sinonasal malignancies accounting for 4.4% of the total case volume. SNMM accounts for ~3.5% of sinonasal malignancies (Cheng et al 2007). Historically, the major approach to treatment for SNMM has been multimodality treatment including surgery, radiation therapy, and chemotherapy. With the evolving role of immunotherapeutics, the authors explore the role of immunotherapeutics in SNMM. Currently, there are seven different FDA-approved immunotherapeutic pharmaceuticals/combinations for the treatment of melanomas: talimogene laherparepvec (T-Vec), nivolumab, pembrolizumab, ipilimumab, ipilimumab + nivolumab, peginterferon α2b, and interleukin-2. We discuss the use and observations of T-Vec as well as ipilimumab + nivolumab.